I'd never left North America before a visit to London at age 52. My explorations of the Old World began in earnest on May Day, 2001, my first full day of freely wandering around with a sketchbook since I'd gotten caught up in the commercial art grind twenty years before.

One thing I noticed was that civilization and nature were much more intermingled  and entwined in Britain than America.
Mother Nature had been conquered millennia ago but held onto her dignity and asserted her rights in modest ways, in rural hedgerows, in back gardens dark enough for starlight and quiet enough for birdsong, in the gnarly 500-year-old black oaks twisting up from the hollows of Hampstead Heath. Such things would be never survive in America, where the war against the wilderness is still raging.

Everything built by people seemed to be created with an almost erotic devotion. The brickwork on an old elementary school was mesmerizing. Soaring organic forms and soft shadows of Gothic interiors might be an unconscious memorial to the great pagan forests of Northern Europe rapidly falling to agriculture circa 1000-1250AD.  Edwardian-era pubs were religious edifices too, called working-man's cathedrals; swilling a pint of real ale with mates within those dark wombs of exotic woodwork and etched glass was a sort of holy communion. Everywhere I looked I saw signs of life, in the work of 12th Century stone-carvers,19th-Century bricklayers, and 21st-Century sign-painters, in  as well as in the faces I studied in the underground and the buses, so much more humble and natural than the hard robotic masks worn by New Yorkers.

By July 2001, after filling over a dozen 80-page A4 sketchbooks, I was picking up an old scent, following an old trail., rediscovering things I'd found during a year (1969-70) at the New York Studio School. Since then I'd been drawing mostly illustrations based on photo-references. Now suddenly forms, spaces, and perspectives were drastically altered—or rather, liberated—by depth perception and peripheral vision. We're not gazing through a framed wall of glass at a world we can never enter or touch (as in photos and classical perspective), we're immersed in the spaces and the lives all around us. We're not facing a flat rectangular picture of discrete inert objects, we're swimming inside a borderless sphere, amid its contents all swirling, writhing, spiraling., in a great unified choreographed dance. If you want to draw what you see,  let your pen follow the rhythm of the visual music you feel throbbing around you. If you don't feel it, or have no idea what I'm talking about, just keep drawing until you do.

After three months back in the US, the London sketchbooks resumed in October 2001. 2002 was another good year, as was 2004. But I drew very little in 2003,  and almost nothing at all after December 2004, during five very grim years. Then in the Spring of 2010, I noticed that I was not dead yet, had nowhere to go but up, and for a month or so, I played around with digital doodles at www.thinkdraw.com. On May 18th, I ventured back to St. Paul's Cathedral and over the next ten days did half a dozen drawings there that brought the London Sketchbooks to a conclusion.

​
Below are snapshots of pictures left behind in London—sent by my esteemed studio landlord Hamid Malaky.

The first batch are six pages from several A4 sketchbooks I filled up in June 2001, about six weeks into a non-stop three-month-long drawing marathon. Two pictures are from Leicester Square, the other four are from 68 Fairfax Road, whose inhabitants included drowsy Eva Salzman and watchful Andrew Neilson.

The next four were done about a month later, in mid-July—two from Westminster Abbey, another from the road to Saint Paul's past the Royal Courts of Justice, and a view of a corner of the cathedral. (I was graduating from A4 to A3 sketchbooks. A4 is about 8 x 11.5 inches, A3 11.5 x 16 inches.)

Finally there's Southwark Cathedral, south of the river, from January 2002.

These are low-resolution photos of fifteen-year-old xerox copies on tan paper,  laid out on a carpeted floor.  There are hundreds more where these came from, thanks to this saintly, long-suffering landlord who now serves as curator of the collection of rusty file cabinets and jam-packed old suitcases I left behind in his custody. Another momento was a little mummified frog that apparently leapt upwards from a busy street four floors below, through an open window, to expire and dry up in a dark corner under a drawing table.* 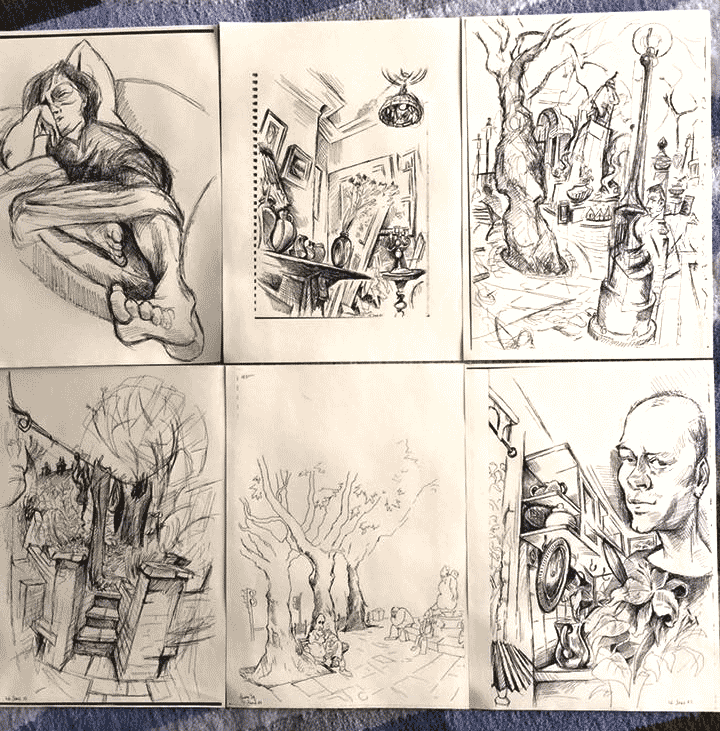 Leicester Square top right and lower center. The other are scenes from 68 Fairfax Road. 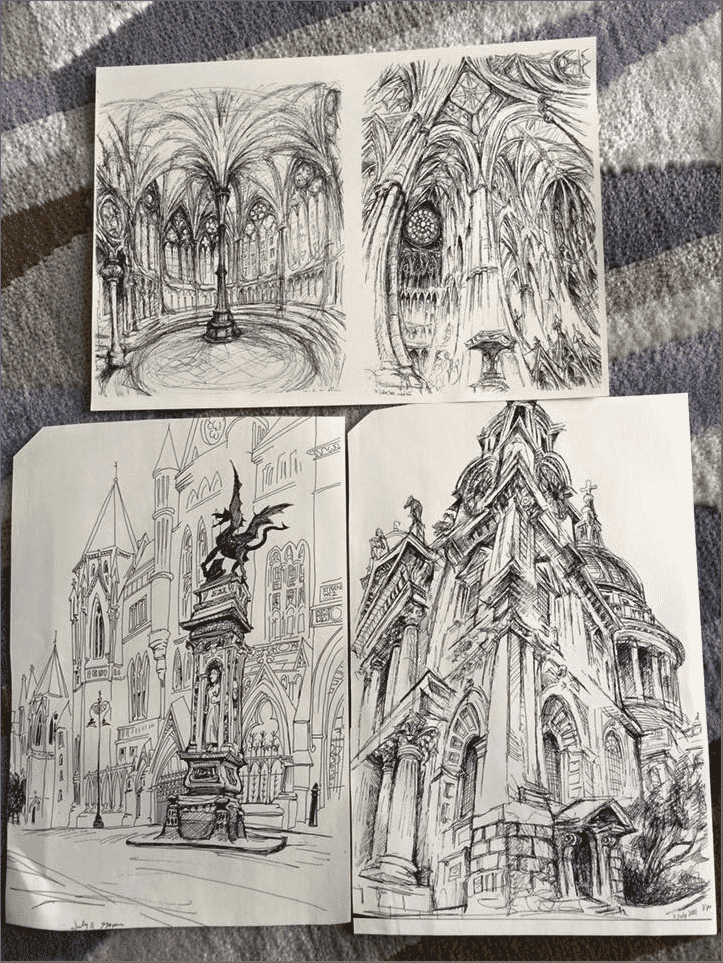 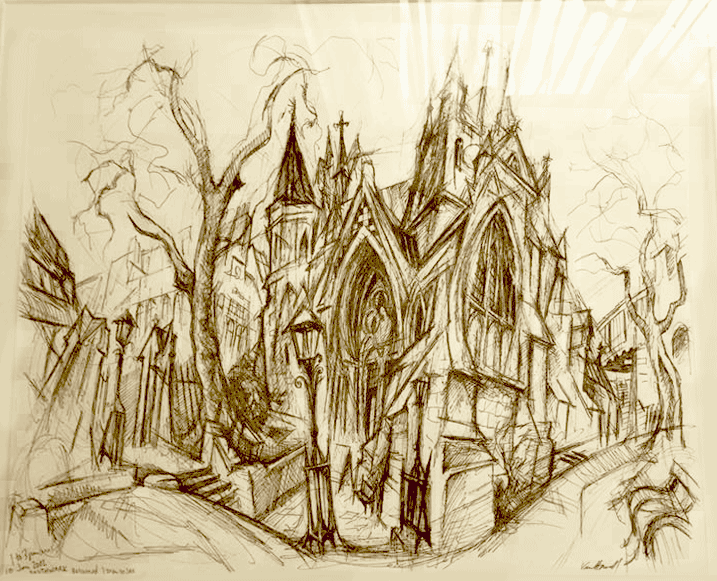 * Hang on!    —   after pondering this mystery for many years, it finally dawned on me just now (9:24AM AEST on Friday 3 March 2017) that  the frog must have been a meal (sadly uneaten) flown in by the loving parents of fledgling pigeons trying to survive in the nest mum 'n' dad improvised out of art supplies and unpaid bills under a collapsing bookcase. I wonder, how many other people have noticed that newborn pigeons look exactly like dodos, with outsize beaks and grotesquely heavy feet?  I saw the resemblance while wondering whether to toss the little featherless monsters out the window or leave them, with the window open, to destroy the studio, when I was about to leave for a two-month trip home to America. In Brooklyn just a couple of days later, I happened to pick up a volume from my in-laws' natural history library, and the very first page I glanced at said that dodos were in fact an archaic variety of pigeon.  So Ernst Haeckel was right after all—ontogeny recapitulates phylogeny!   Everyone had to memorize that slogan in school, once upon a time (along with the pledge of allegiance to the flag, and to the republic for which it stands, one nation, not yet under God). 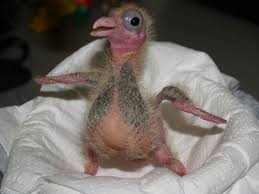 Found this through a google image search. Went to source, found photo credit, which was: "Google.com". Soon every image in the world will be credited to Google.com. 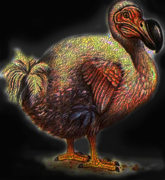